The Witcher was one of the most epic and well told stories out there. It has its technical flaws that we will get to in just a moment, but if you are one for a good long story mode then settle in and get ready for a masterpiece.

The glaring weakness for The Witcher, that certainly can ruin the experience for some people, is the clunky combat system. The longer I played and advanced my magic and strikes the more I actually became endeared to the system personally, but this is a noticeable problem and one that friends of mine have put down the game over. You have 4 different weapons available to you at all times, a steel sword to be used against humans, a silver sword for use against monsters, and two other weapons spots for hammers, axes, flails, and other things of that nature. In addition to these four weapons you have 5 magic signs that you can build up and use against your foes. There is Aard which is basically your force push sign, Igni which delivers a blaze of fire to ignite your foes, Quen which summons a force field to protect you from damage, Axii that can cloud the mind of lesser foes and have them do your bidding against eachother, and Yrden the sign of containment which can trap your foes making them easier to attack. 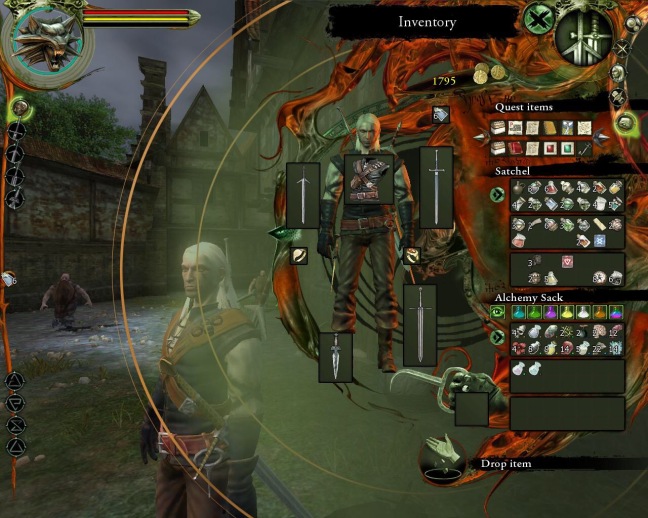 My two most used signs were definitely Igni and Aard, but there are so many different possible fighting styles and combinations. While on the topic of fighting styles, I should certainly mention the different Witcher styles that can be used for your swords. There is a fast attack for faster foes, strong attack style for the beastly competitors, and lastly the group style when you are attacked by a swarm of enemies which *spoilers* happens a lot.

So let’s get to some of what makes this one of the best games out there, the amazing story. I have got to shout out one of my favorite elements that always delights me in any story, the Lovecraftian horror. It is everywhere to be found in the Witcher, from the cult of the elder Gods, to the worshippers of Dagon, and to the monsters looking like something climbing straight out of innsmouth (the drowners), this game is full of winks and nods to the great H.P. Lovecraft and that is something I always love to see.

Beyond the Lovecraftian influence there is much to be said for everything The Witcher’s story does right. You are Geralt of Rivia a mercenary who slays all the monsters and gets all the girls. As you travel along your journey you encounter many interesting characters and make many decisions that affect the face of the game as you see it. You encounter a group of knights reminiscent of the Knights Templar who are known as the Order of the Flaming Rose. There are Witches, Dwarves, Elves, and an evil terror organization names the Salamandra whom it is your duty to destroy, or perhaps aid depending on the direction you take.

The voice acting is very questionable at times and can ruin the mood of a dramatic scene, but it does not take away from the joy in fulfilling the steps of your quest. I was very fond of the way that you learn about new beasts and plants to be harvested, you can learn about these things and much else in the way of lore and character development by reading books that can be bought or found all over Temeria. The stories are very interesting at times and of course in some of these books there were more nods to my man Lovecraft.

As for the ending, let me suffice it to say it does not disappoint by any stretch of the imagination. To match the rest of the quest it was incredibly inspired, well thought out, and grandiose, with much left to be wondered by the imagination. Without spoiling anything it will make you question everything you have done in the game and see the points to be made by your adversary in a way that I have never seen before. 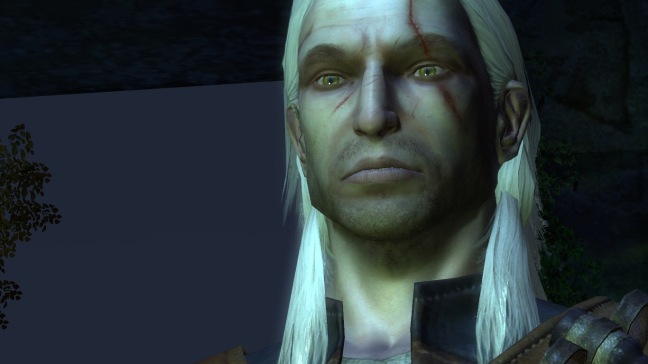 All in all The Witcher is not a game to be taken lightly. It is something that every RPG fan must experience and is quite an amazing way to start of what has become a critically acclaimed franchise. In short, if you are an RPG junkie stop what you are doing (including reading this blog) and go download it now. Nothing is more important than beginning your journey as Geralt of Rivia, may the Eternal Fire guide your sword and the old Gods allow you a successful and prosperous campaign!

One thought on “The Witcher: Enhanced Edition”